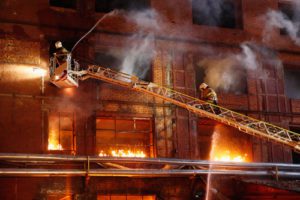 Fire prevention in buildings is a major subject across the world. Billions of dollars and hundreds of lives are lost due to fires in residential apartments, villas, commercial buildings, hotels, high rise buildings etc.

The present-day challenge is that we come to know about the fire only after it erupts. Then the fire protection department has to act as fast as possible.

Using Artificial intelligence, Data Science and an array of sensors, we can reasonably predict the possibility of a fire occurrence, especially from the electric circuits. Fire starts from an electric circuitry mainly due to short circuit, overload, a disintegration of insulation etc. All of these cause different patterns of current flow and heat generation.

Many of them develop gradually before breaking down, causing a fire. Using an array of sensors, we can analyze these patterns and keep looking for signs of a possible fire. Some examples are a gradual temperature increase in bus-ducts, cables, electric panels, generators, electrical machines etc. We cannot determine the possibility of a fire just by looking at isolated events. It will require a detailed analysis. This requires the latest technology such as Artificial Intelligence.

Bus ducts and bus risers are a major cause of a fire in buildings. They constantly generate heat. Hence an excessive temperature cannot be considered as a possibility of a fire. The temperature of a bus riser will be dependent on the electric load derived from it. This depends on how many circuits are switched ON at a particular time. Also, the time of the day may be important, since different loads are operated at different times of the day.

By analysing all these signals, combined with details such as day of the week, time of the day etc. it is possible to analyze any abnormalities. We have to connect all these signals to a system with Artificial Intelligence capabilities. It will have continuous learning capabilities. For the initial weeks, operators have to monitor these parameters manually too. Thus chances of any misinterpretation are eliminated.

The system can also be connected to a soft alert system such as a phone call or SMS alert system. As the system generates an indication of chances of a fire, operators can start monitoring those particular elements. This can be evaluated to determine whether it is a real potential threat. If it is not a potential threat, the operator can incorporate in the AI system so that it is not considered by AI as a threat thereafter.

Such a system when effectively implemented can predict potential threats weeks in advance.