CO Sensor with VFD and Exhaust fans for Basements and parking

Carbon Monoxide (CO) is dangerous for human beings and will cause even death within minutes. This is mainly formed in underground parking, basements etc. CO is generated by combustion with insufficient oxygen. When sufficient oxygen is available for combustion, Carbon Dioxide (CO2) is formed.

How Carbon Monoxide is generated?

In a basement of a building, oxygen levels may not be sufficient and the combustion may not be complete. This can occur in vehicles, gas stoves, boilers, coal heaters etc. which are operated in the basements. Under such conditions, Carbon Monoxide is generated. The occupants of the area will be unaware of the same and hence it becomes a dangerous environment. Hence continuous Carbon Monoxide (CO) monitoring is important for such scenarios.

A CO sensor detects the presence of Carbon Monoxide. We can program the sensor to generate alerts if the level of CO exceeds the permitted level of ppm. It generates a control signal which can operate exhaust fans. If the sensors detect that the level of CO has exceeded the permitted levels, the panel switches on the exhaust fans. They immediately remove the contaminated air from the area and brings fresh air. We use a VFD control so that we can control the speed of the exhaust fans based on the ppm level. 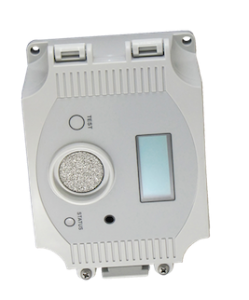 The following components essentially form a CO detection & CO monitoring system for a basement car parking. A number of CO monitoring sensors will be installed at various points of the basement car park. All these sensors will be connected to a central PLC control Panel. The PLC continuously takes inputs from all sensors. In case any of the sensors read high reading, the PL gives an output signal to the VFD. The VFD then operates the exhaust fan to eliminate the air in the basement parking to bring fresh air. As soon as the CO content is reduced, the exhaust fan stops after a certain time delay.

As explained above, a sensor is used to detect the level of CO and give an output signal. The number of required sensors is decided based on the size of the area or car park. All sensors will be wired to the common PLC panel.

A VFD is used to operate a motor at different speeds. This VFD will be controlled by the PLC and will control the exhaust fans. If the CO content is more, the exhaust fan operates at a faster speed. Please read more on VFD.

The number of required exhaust fans will be decided based on the size and shape of the area. The exhaust fans are controlled by the VFD. Basically, the exhaust fans have to remove the contaminated air at a fast rate.

Certain customers prefer an audible alarm as part of the CO monitoring system. In this case, we can take one analogue output from the PLC and connect to an audible alarm or siren. In case the CO measurement is high for a certain time, the alarm will be activated.

If you require a phone call or SMS alert if the CO level goes high, we can connect an additional system. This will generate phone calls and SMS to 8 operators. It will also deliver a recorded voice message indicating the type of fault, location etc.