Automation of industrial doors is carried out using Infrared sensors. 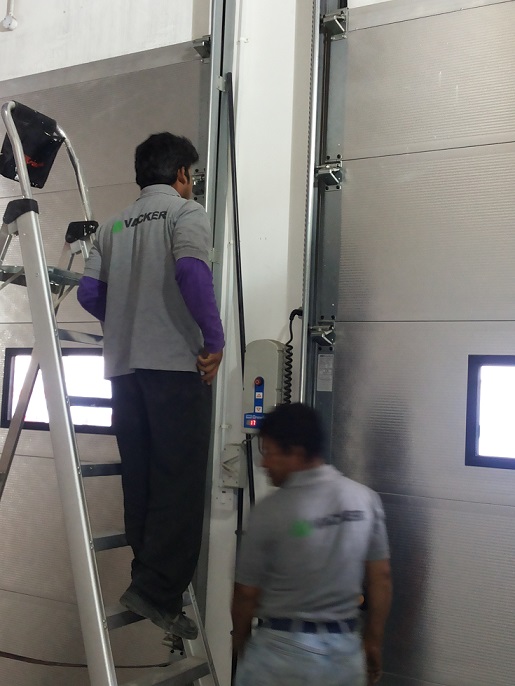 Infrared transmitter and receiver are fitted on either side of the industrial doors to detect the opening and closing of the doors. The basis of the detection is that the transmitter constantly transmits infrared waves to the other end. The receiver continuously receives the rays. If there is any interruption, the receiver detects that there is a material or human being in the path and through an array of logic it determines whether the door is in a closed or open position.

The project carries out by us as shown in this picture involves 23 industrial rolling shutters of a pharmaceutical industry. The opening of the doors was to be controlled in a sequential manner to prevent hot air coming into the interiors.

The door opening was detected through the infrared sensors and a logic was achieved through PLC (Programmable Logic Controllers) to achieve the following: 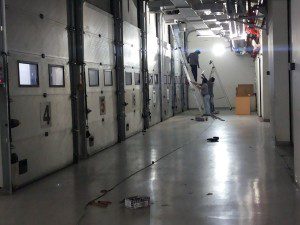 The doors were grouped into three groups. If any of one group of the doors are opened, the doors of the other two groups cannot be opened. However, other doors of the same group can be opened.

It is also possible to manually change the setting through a control switch so that a door from another group can be opened for 60 seconds after which the door will be closed automatically.

Similar automation can be carried out for Gates, Rolling shutters etc.

This project involved the automatic operation of air curtains for a loading bay of a pharmaceutical warehouse. For pharmaceutical or other temperature sensitive products, the flow of outside air into the warehouse should be controlled.

In practical conditions, it happens that the operator will forget to switch on the fan while opening the door and thereafter to switch off the fan after closing the shutter. This necessitates automatic switch ON/OFF of air curtains.

We can provide this system for roller shutters as well as glass or wooden swing doors or slide doors. For swing or slide doors, we will provide different types of sensors for activating the system.